The moment the Ecumene was founded, it began making plans for interstellar exploration. One of the most promising targets was the long Hydric Main, which contains over two hundred stars and covers much of nearby space in the "northeast" quadrant of space from the Ecumenical Cluster- its vast size and relatively short travel distances would ensure at least some useful worlds. Exploration of the easily-explored Ecumenical Main had been in progress for centuries before, and had proven that the Hydric Main was inaccessible directly from the Ecumenical Main, but the newly-developed leap drive would be capable of crossing at least five gulfs previously considered entirely uncrossable. Each of these was probed and found that the star on the other end was, indeed, accessible; but the large sensitive computers of the time were incapable of continuing along the newly-available mains on their own. Manned ships would be needed to effectively travel- for the complex resource-utilization machinery aboard scout ships was still in its infancy, such that it required a team of operators to extract the materials needed to keep a scout running.

The route expected to lead most directly to the Hydric Main was tried first- but after a four-leap journey lasting four years, it was revealed that the star nearest to the Hydric Main had too few usable supplies to continue. Nearly a year of scavenging asteroids had allowed them to barely make it back to the previous star, with not only food but also the material that sustained the leap drive running low. Next the "northeastern" route was examined- but its first star proved low on such usables as well. As such, an eye was cast to the "southeastern" route- but only two-thirds of the scout ships sent there made the two-way trip successfully, presumably due to the star's dimness (it had only been discovered a millenium before, long after nearly every other star of a similar distance from the Ecumenical Cluster). The northern route was tried next, and in fact had enough resources to cross over three stars to the next main, but the next main proved to have far fewer usables.

The southeastern route was tried again, for such was the fervor of research into a way to reach the Hydric Main that the leap drive was made considerably more reliable. The stars were immediately hospitable- while the direct route east ran low on resources three stars in, the southern route slowly snaked eastward for twelve stars. Each twelve-star expedition took a full decade, but the Ecumene was unwilling to give up. After the first expedition, two more attempts were made to go further before a final decision was made: The largest interstellar expedition of all time (at least, up to that point by the Ecumene) would be undertaken.

Initially, the plan was to send ships carrying additional supplies along with the scout ship- but because each ship would require its own set of leap calculations, the scout's crew complement would have to increase. Plus, the heavy resource utilization machinery would have to be duplicated on each ship (for the supply ships would need to make the leaps leading up to further exploration using fuel that wasn't meant for the continued exploration itself, let alone the refueling needed for the return trip). This would need to be remotely operated from the scout, because the computers remained incapable of doing it on their own. As such, the scout's crew complement ballooned such that it was too many to match the leap drive's tight mass requirements- so two ships would be needed, each of which needed its own complement of supply ships, and each set of supply ships needed more operators.... The equilibrium point was five scout ships, each with its own contingent of supply ships. Theoretically, this vast quantity of ships would allow the expedition to either leave a trail of supply ships for future use or for take every supply ship along with every leap to continue on for as long as possible.

The expedition- five crewed ships, twenty uncrewed ships, and five hundred sixty people (ten from each of the Ecumene's most important worlds) vanished into the night. Almost nine years later, the messages the expedition sent upon arrival at the first star of what was now known as the Hesperian Main (for unlike the probe missions this mission could not immediately return home, and there was as yet no non-ship method of faster-than-light communication) arrived. All was nominal- the dim red star remained normal, though from their direction they were able to take note of a moving dust cloud slowly choking off the light from the Ecumenical Cluster. As they continued along, the messages took longer and longer to arrive- such that by the time the eighth star's messages arrived, revealing tensions among the crew running high from the several years on cramped starships, the message from the ninth and tenth stars had already arrived at home. The eleventh star was when the Ecumene really started to worry- surely if the trip had gone well the messages from a returning victorious expedition would be arriving now, perhaps even from the first star of the Hesperian Main? Or maybe the expedition had gone even better than expected, and they were mapping out the Hydric Main this very instant!

This proved to be a deeply optimistic assumption. By the twelfth star, five and a third years into the expedition and twenty-three light years away, the crews went from dissatisfaction at the mission- called an exile several times in the full data dump- to open resentment. The message from the thirteenth star, recieved five years later (though sent three-quarters of a year after the previous message), outright stated that the expedition would continue on its new mission- to find a place that wasn't the Ecumene. This news sent the Ecumene's political system into disarray- and in the ensuing anguish it was decided that the information that allowed for this disastrous endeavour, that alienated a goodly portion of the Ecumene's population and quite possibly killed six hundred people, would be discarded. By the time ten years later that the message from the fifteenth star had arrived, the dim red dwarf at the head of what was now the Lost Main was obscured not only by a cloud of dust but by willful ignorance.

The expedition had found, thirty-nine light years from home and yet just nine and a half years after setting out, a planet that would later be revealed to be remarkably common: A world not only habitable, but inhabited by semi-complex life. A world not only lifebearing, but with robust life somewhat compatible with the biology of life in the Ecumene. This was not quite a surprise- the Ecumenical Main's habitable worlds all followed a similar pattern- but it was the first world discovered to have life like this beyond the Ecumenical Main (if only because the Hesperian Main was the first main to be explored in-depth). This discovery was not known to the wider Ecumene for a long while afterwards- the unsent message from that star would have arrived almost fifty years after the expedition left, and by then many were afraid to listen.

One hundred and eighty years after the expedition's thirteenth-star message arrived, the blow of the loss of the expedition had softened enough- and drive technology advanced enough- that an attempt at finding the expedition was considered a good idea. However, the purge of information about the head of the Lost Main had been complete enough that a sectional stellar survey was needed to find its location. In the endless re-checking of information, an obscure red subgiant star was discovered to be rather closer to home, and as such rather dimmer (theories abound to this day on whether that designation was a deliberate coverup or an honest mistake). This had to be the star at the head of the Lost Main- it was almost certainly on the correct bearing, and was barely within range of early leap drives. With the abilities to have a higher-mass spaceship and newly-advanced automation meaning a smaller crew was possible, the ship was set up within a few years- this single ship, loaded with well-adjusted diplomats who worked well together and an experimental interstellar communications device, would go on a several-year mission to locate the resting place of the Expedition.

The red dwarf's system remained as dusty as it had been since at least the arrival of the first scouting ship, though very little information remained in the Ecumene to corroborate that description. The search ship had a lucky break- instead of following the circuitous southern route, it followed the much more direct eastern route (and had the spare mass-budget to bring along enough fuel to head right on through it). It found the Expedition at the end of one of the two tails of the Lost Main- and encountered a bustling, if small, civilization. The low initial population and requirement of getting on and off the planet (now named Sanctuary) to deliver supplies had necessitated the improvement of automating technologies, so the supply ships- previously unable to complete orbital rendezvous, let alone resource utilization on their own- were able to set off on long missions to mine out asteroids for materials. Three of the scout ships sat connected together in orbit of Sanctuary, while the other two stood as the largest buildings on the planet.

The search ship was told soundly to go away after retrieving any supplies needed for its return trip, but its captain managed to convince the people of Sanctuary to at least accept the blueprints for the interstellar communications device before leaving. This linked the Ecumene to Sanctuary, which was initially met with widespread resistance- but continued concessions (the knowledge of the improved leap drive along with the lost hop-family drives, a promise from the Ecumene not to unilaterally inhabit the Hesperian Main, and the assurance that technology native to Sanctuary would only be used with the permission of Sanctuary's citizens) eventually led to the warming of relations between the two. The Ecumene expanded slowly, pointedly avoiding much of the Hydric Main to allow the much smaller population base of Sanctuary to inhabit it instead- and thirty years after contact the first loads of emigrants left for Sanctuary. Sanctuary's population boomed, such that the planets catalogued within the Hesperian Main as "tier-two inhabitation targets" (and several worlds and systems not discovered during the rushes to find the Hydric Main or the Expedition) began recieving their own surface installations.

The worlds initially inhabited from Sanctuary never have been able to rival the entirety of those inhabited from the Ecumene in terms of population- but stars in four prefectures of the Ecumene were originally inhabited from Sanctuary and its own descendants before they eventually decided the Ecumene's cultural regulations were loose enough to justify joining it. Sanctuary's unique culture is not vanished- but the vast sweep of time since its inhabitation has ensured that the cultures that draw their descent directly from Sanctuary are as varied as those that draw their descent directly from any system of the early Ecumene. Whether as genuine heirs or as claimants of an ancient tale, Sanctuary's people live on. 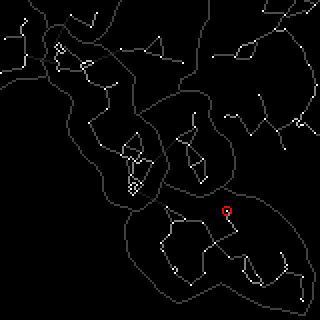 A map of the mains directly connected to the Ecumenical Main by single trace-lines, plus the nearest arm of the Hydric Main. Sanctuary is highlighted in red.