Edelen/Ticash was the first world outside the Ecumene found to have spacefaring life. In the year 1573, a new leap drive-equipped Ecumenical survey ship was exploring the Boreal Main two leaps and a jump to the "north" of the Ecumenical Main, and discovered an odd highly oblate world- moreover, one with obvious life. As the survey ship had suddenly appeared in orbit of the third planet, within the first day of its initial survey it was immediately hailed from various sources within the budding interplanetary civilization. The protocols for the discovery of intelligent life assumed use of the jump drive and a prolonged period of study before contact... so the survey ship had no recourse but to immediately leave.

Confronted with obvious evidence of other aliens after only about a century and a half of space travel as opposed to the Ecumene's millenium, the peoples of the Davin/Arsha system handled the relevation rather more easily. Exploratory technology was quickly a prime subject, and technologies that would eventually lead to hop-family, leap-family, and subspace drives became available rapidly. By the time the Ecumene had finished panicking about the prospect of non-Ecumene life and assembled a possible plan of contact, ships from Davin/Arsha were travelling to the other six star systems in the local cluster.

When the first diplomatic expedition arrived in the core Boreal Cluster, it discovered ships from Davin/Arsha- built to work well with abortive subspace technology, the spacecraft looked entirely different from those seen before. Not prepared to encounter two spacefaring alien species at once, the diplomatic expedition retreated home. This ended up being a good idea, for of course Edelen/Ticash does have two spacefaring species. Edelen/Ticash's north and south poles have nearly double the gravity and double the greenhouse effect as the equator, and the equator's taller atmosphere means its temperature is more variable, which produced three different main families of life- two of which eventually developed intelligent species.

Edelen's life, being equatorial, reached space the easiest- the lower gravity and quicker rotation served to help spacecraft into space. However, Ticash was not far behind- a satellite from Ticash was actually the first to map the full extent of Edelen-Ticash due to its natural polar orbit. This allowed for practical connection between life from Edelen and life from Ticash- a space station had no effective gravity, and the atmosphere could be tuned to not be debilitating for either. Edelen-Ticash's four moons, each comparable by size in the sky to Luna, are quite varied in coloration; and the other five planets in the Davin/Arsha system are often large in the sky- which was a natural cause for further exploration.

Edelen/Ticash quickly became the second-largest "nation" known to the Ecumene, after the Ecumene itself and before Sanctuary. It quickly caught up with the Ecumene technologically, and was the first place to deploy practical subspace drives in the year 1872. Worlds initially inhabited from Edelen/Ticash form a substantial portion of the Ecumene, and Edelen/Ticash has always had a closer affinity to the intelligent life of stars along the Hydric Main and the Hyperboreal Mains than to the Ecumene proper.

A basic map of Edelen/Ticash, showing the northern area of Ticash and the equatorial area of Edelen along with the cosmopolitan south: 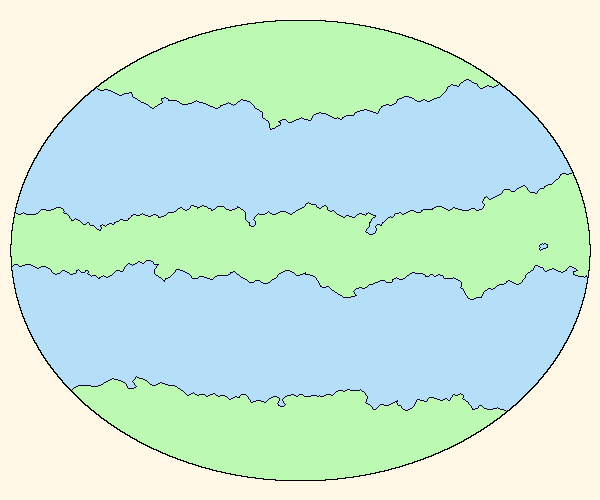 A note: Edelen/Ticash orbits in almost exactly 754 local days. Due to its low axial tilt, the climate is determined mostly by geography and by the extreme oblateness of the planet itself- and there is nearly no midnight sun.

The bodies of the Davin/Arsha System: