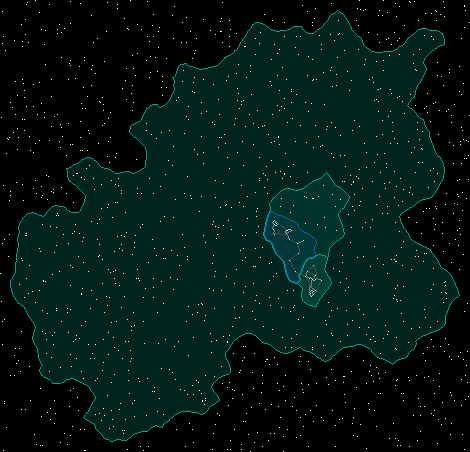 The Ecumenical Cluster is a fourteen-star system cluster (string of stars no more than three point three light years apart) that was the hotspot of industry within the centre of the Ecumene for a long time (though in modern times it has been decidedly overshadowed by other almost-as-ancient hubs). All fourteen stars have at least one habitable world, and several lesser worlds besides. Note as well the fifteenth star, not connected to the cluster but intermittently inhabited largely by virtue of its proximity to the cluster. The stars of the Ecumenical Cluster are here shown by a greatly exaggerated version of their spectral color. The Ecumenical Cluster can be divided into its two overdensities- Overdensity Ecarna (left) and Overdensity Sedelay.

Despite Sedelay being larger in terms of star number, Ecarna was more prosperous before contact- Ecarna's four homeworlds reached space -and, a century later, the hop drive- earlier than Sedelay's eight. Ecarna's polities were also willing to invest in slow starships to cover the longer gaps between Ecarna's outlying stars, and quickly the three stars closest to Ecarna- and their five homeworlds- became somewhat integrated (to the extent possible- quick sublight drives made the distance in just under a decade) into pan-Ecarnese culture. (With the knowledge that such sublight travel was possible, settlers from the binary-homeworld system of Yissak-Talniu embarked on an eighteen-year journey for the fifteenth star. They found it devoid of habitable worlds, but they had grown rather accustomed to their closed habitat anyway....)

As Ecarnese interstellar capability began to wane (back then, wars were still rather beyond the area of highly symbolic combat they most often are today), Sedelayn civilization came across the skip drive and its considerably better range- and caused a boom in interstellar travel clusterwide, contacting as well the two previously-uncontacted groups, which by then were stretching against the bounds of their small red-dwarf systems. This unified the fourteen (sometimes fifteen) stars of the cluster, setting the stage for the much younger Union and Ecumene. 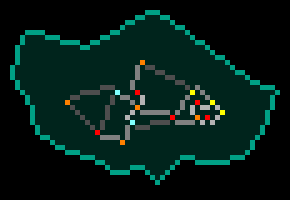 Worlds of the Ecumenical Cluster by order of spaceflight discovery (defined by crewed interplanetary/lunar landing (see Accessory 11.3 for debate on the fairness of this definition)). Note that stars are described by their position and color in the image, like "Rightmost Red Star".