Traveller is a roleplaying game first created in 1977 and with between 5 and 14 game editions produced since then. I don't do roleplaying games much, despite my awful nerdiness, so I mostly like it for its primary setting, the Original Traveller Universe:

The Third Imperium is a vast interstellar coalition which simultaneously has ultimate power and no power at all. Of the 11,000 star systems within the Imperium, very few are actually directly under control of Imperial authorities. Rather, they mostly have their own near-completely-independent governments, which control all of the world except for the main starport. This allows Traveller to have people from disparate settings- one could certainly play a game of a conventional fantasy RPG leading directly into a game of Traveller.

The Third Imperium mostly exists because it's very good at controlling fast news. There are no ansibles or other forms of wave/transmission-based FTL communications in Traveller, partly because Traveller is based off of 50s SF and the ansible was named by Ursula K. Le Guin in 1966. FTL communications is only possible by carrying messages aboard starships, which are fairly hard to build and fuel partially because they often take up half the space aboard a ship. To exploit this, the Third Imperium uses X-boats, or express boats- hundred-ton single-pilot starcraft that carry the most important news from star to star at a speed of about 1.9 light-years per day. The drive that enables them to do this is called a Jump-4 drive, which is a type of the only FTL drive in Traveller. A Jump drive travels in multiples of a parsec, about 3.3 light-years (also the size of a map hex on the interstellar map).

The Jump drive is famously difficult to create, such that in all of charted space it's been invented perhaps twelve times. At the point in time that most Traveller games are set (between the Imperial years 1100 and 1120) the best and fastest is the Jump-6 drive (though Jump-7 has definitely been created), which predictably travels six parsecs each jump. However, even of the few people who get to go to space Jump-3 drives are something to remark upon- so the Jump-4 X-boat remains an important tool in keeping the Imperium together.

It should be fairly easy to tell that the Third Imperium is a major inspiration for the Ecumene.

There are a bunch of Traveller settings, in various milieus or time periods throughout the setting. A list of the main ones-

There are people who absolutely hate some of these. Obviously.

I've made some stuff for Traveller's setting, from stuff that's modified from other people's maps to stuff near-completely of my own invention.

The Evil Huge Map- made with the Travellermap website's poster maker, I made a nine-sector map of... something. It's a really big image, so make sure your computer can handle stupidly big images.

Patents of Nobility for me and my friends! I made these because I was sad I didn't have the chance to pay like a hundred bucks in a kickstarter for an Actual Physical one, so I made my own emulation.

Skyhaven! Magyar 3118, Kline 708! Skyhaven is an official world recorded in Traveller, and all we really know about it is this:

I, myself, am an anarchist, though not quite in that particular Skyhaven way. So when I wanted to make what would be called a travellersona by some and a personal character by others, I chose to have her live on Skyhaven. I quickly became infatuated with the world, and made my own lore for it and a bunch of maps and....

Skyhaven system has been inhabited since the days of the Viru Sirka- records are scarce (the earliest map in which it is noted as under Imperium control is -2434), but UWP codes from the time of the Terran Confederation indicate two possible colonization routes- it is one Jump-2 jump off of the Walpurgian Main (then the Uruk Main) from Parperides (then Nagunishmure) to the coreward-spinward, and is a Jump-1 and a Jump-2 jump from Einkamp (then Shinarra) to the rimward- both possible systems had hundreds of millions of people at the time. The general area (Magyar sector, and nearby areas of the Solomani Rim) was known as a place for odd people, though not quite Khagarii, in the years immediately before Terran contact; and this was preserved afterwards.

The system then known as Shuurashana was ceded to the Terrans after the Albadawi Campaign in -2246, largely severing its ties from the still-Imperial Walpurgian Main. One of Skyhaven's claims to fame is that the famous Admiral Albadawi visited the system aboard TNS Indomitable (one of two surviving Terran Confederation Navy battleships, exhibited in the Solomani History Museum (Halfway, Eberly, Diaspora 2130)) shortly before becoming Grand Admiral. When the Rule of Man settled Solomani across Imperial space, Skyhaven was one of the least affected- the Solomani settled there, though they doubled the population, were part of a group that considered Solomani equal to the Vilani already living there.

They did, however, make a major change- the founding of a democracy. Skyhaven's democracy was initially rather loose, and soon individual islands became largely self-governing. As this progressed (federal democracy to confederal to several small democracies) over four hundred years, as the Rule of Man collapsed around it. The Rule of Man split in two 200 years after it was founded, and Dingir lost contact with Hub about a hundred years later and made Rim Province de facto independent.

Two hundred years later, Rim Province ran out of money- and Skyhaven was one of the worlds that recieved a portion of the provincial fleet when the edifice collapsed. The war in space that followed helped cement the long-standing pacifist Skyhaven culture. Before the Reavers could move in, forces from the Dingir League and Terran Mercantile Community each moved to defend Skyhaven, seeing it as a major strategic point in stopping Reaver incursions. When the Reaver era ended hundreds of years later, several of the foreign vessels- now crewed by more Skyhaveners than foreigners- stayed, cementing an odd tradition of fully communal ship ownership.

The military teeth of these craft were maintained- raiders still prospered as the Dootchen Estates- and as such Skyhaven was still running Jump-capable ships when trade along the Walpurgian Main shut down in -1020. Skyhaven's extremely distributed base left it largely functional through the Long Night, though not functional enough to expand at all, and Aslan incursions were met by Skyhaveners utterly confused with the Aslan insistence on land ownership rights. The ships remained functional, if barely, even past the founding of the Third Imperium- Skyhaven made treaties with the re-ascendant Dingir League, and when Imperial forces finally reached Magyar sector in 346 Skyhaven was one of the many client states established on the Solomani Rim.

When the Solomani Confederation reached Skyhaven, they were at a loss as to what to do with it- the Confederal order instated a bureaucracy and renamed the world Herrero in 965, but Skyhaven made enough trouble that when the Solomani Rim War ended they were ceded to the Third Imperium, and Skyhaven's odd order- a communal anarchy, bad reactions to violence, and a defense fleet independent from Skyhaven itself- stands to this day.

so the thing about skyhaven is that the combination of some of its systems- pacifism, anarchism, and in extreme cases punitive blackballing- is it really encourages the widely-distributed small communities it has a reputation for

it has cities, of course- can't really manage having a class-b spaceport and hundreds of thousands of people without them- but a lot about those cities is automated. in a reverse of many worlds, factories are often semi-centrally located and residences are near-exclusively outside of the cities. as a result, meshnets and satellite internet are vital to cohesion

obviously there are a bunch of more traditional cities but they're seen as a little odd. personal rapid transit is a big thing, if you combine the idea of a trolley with the idea of an elevator you won't be far off

the UWP tells us it's very high-tech, tech level C, despite its pretty small population. canonically it's closer to an agricultural world than an industrial one, which i'm interpreting as "it exports agriculturally, breaks even on utilitarian goods, and imports luxuries". to me, this means that pretty much all the farms have a cargo agrav to do that job.

you load in your stuff, make sure its batteries are topped up, and it cruises off to your local port (you can monitor it and set all your stuff for buying and selling remotely)

there, your agrav will be packed aboard a more robust craft and delivered to a starport- there are a few on the planet, but the most lucrative is usually downport imperial (it's on the semi-continent of Duuna), which is the official imperium-sanctioned planetary starport. downport imperial was built to class d size standards, though, so while it can be lucrative it's lucrative because only the very big groups pay their way to land their ships there. there are four other planetary starports, each capable of handling more ships than downport imperial, and if you're the average person who really only sells a few tons of stuff at maximum you'll do just fine at the other starports. you can get pretty much whatever at the starport, so you'll probably send your agrav in no matter what, and your community- pretty much always including someone who wasn't born on skyhaven and as such understands the concept of money better- will eat the costs.

Skyhaven is a place where model governments and similar fun things abound. The North Corona Skyhaven National government is one of the larger ones of these, and its gimmick is that it runs three elections with completely different political parties for each one at the exact same time. 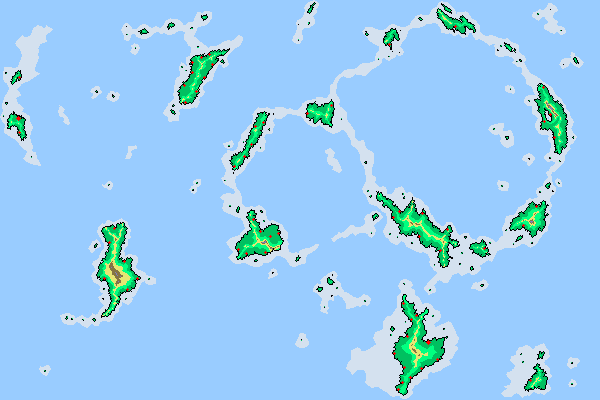 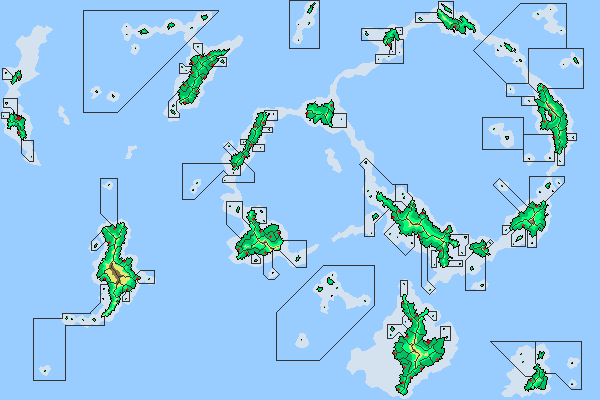 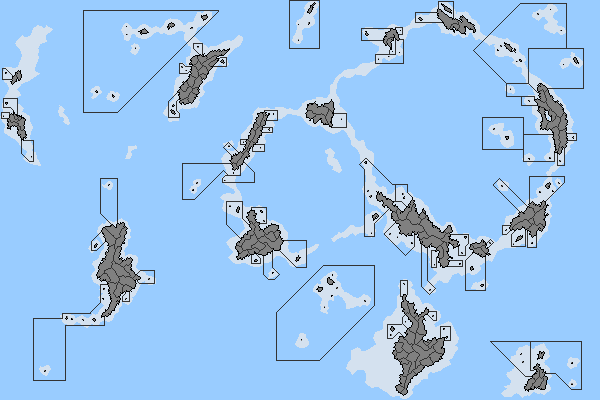 There are 62 towns (of 1000 people or more) in the North Corona, two of which have starports and consequently quite a few more people. The North Corona has about 1/6th the population of Skyhaven as a whole, about 110,000 people.

"All the big parties- always the same politicans, the same ideas, and nothing changes. That's why I'm running as the Liberation Party of Niparedin's candidate for chief executive!"

"You... are aware that nothing changes because this is essentially just a model government, right...?"

"Oh, come on. I was trying to stay in character and you ruined it."

A map of the chief executive elections (year 1116, results tabulated 184-1116) of the North Corona Skyhaven National Government (one of three similar entities on Skyhaven of similar size). Party aims are severely outdated- some symbology traces its roots to serious political movements espousing similar aims from over a millenium ago. A very few parties advocate for the status quo (sometimes described with terms as outdated as "anarchic-digger equalsocialist")- they're derided as "missing the point". 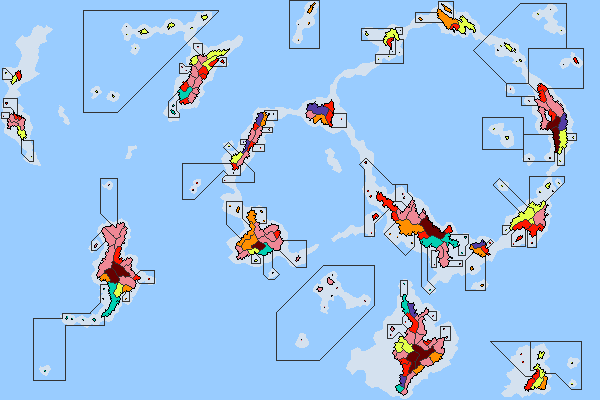 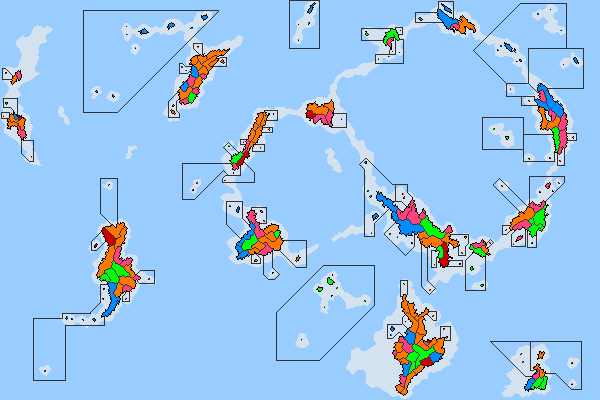 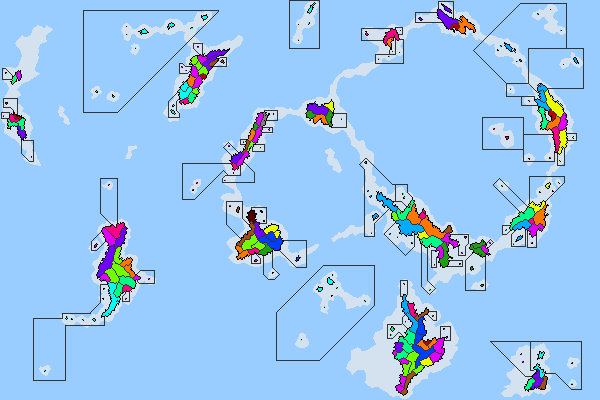 A simple map of a single sector- modified from a version on the Zhodani Base website, to add numbers for each hex and coloring for allegiances.

My own version of Vilani script, for one of the most important languages in Traveller. 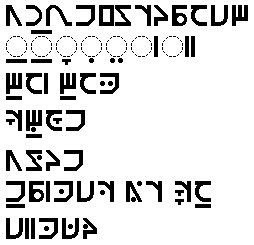 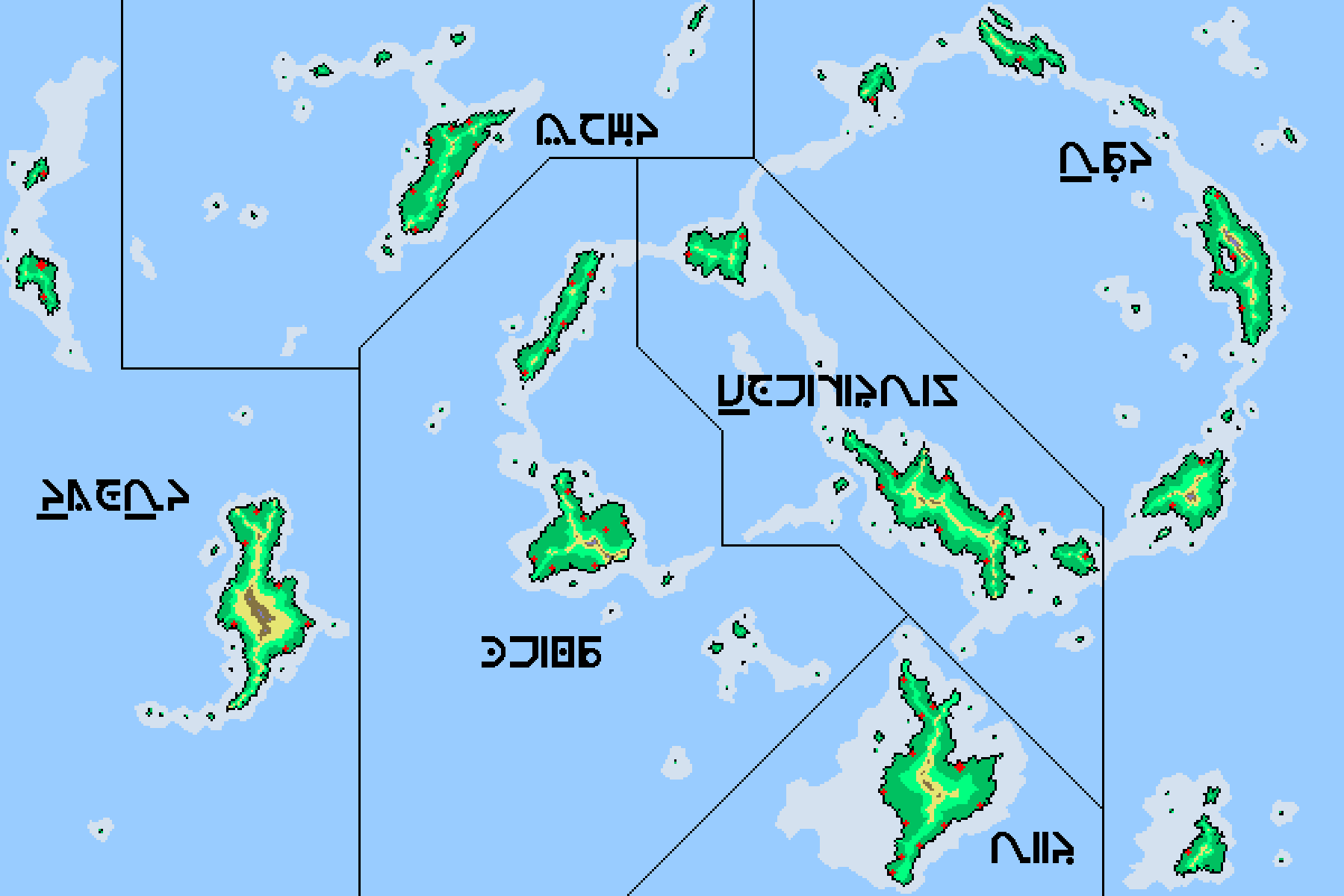